“President Duterte saw to the arrest of Senator de Lima a year ago to vilify her for her strident and principled opposition to his murderous drug war,” said Phelim Kine, deputy Asia director. “Instead, her prosecution has only raised her global stature and brought greater attention to Duterte’s demolition of the rule of law and respect for human rights.” 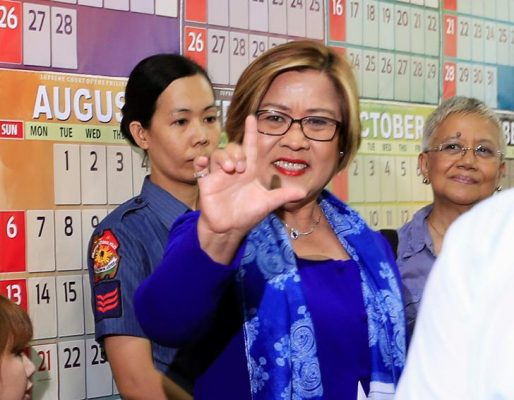 On February 17, 2017, the Philippines Department of Justice announced that three charges had been filed against Senator de Lima, her driver, and a former jail officer for allegedly violating the country’s Dangerous Drugs Act. One week later, on February 24, de Lima surrendered to the police following the issuance of a warrant of arrest the day before. She was subsequently detained at the Philippine National Police (PNP) headquarters in Camp Crame, Quezon City, where she remains to this day. De Lima has repeatedly denied the allegations, calling them political persecution for her criticism of Duterte and his abysmal human rights record.

Instead, her prosecution has only raised her global stature and brought greater attention to Duterte’s demolition of the rule of law and respect for human rights.- Phelim Kine, Deputy Asia Director

The police appear to be imposing punitive conditions on her detention, denying her access to a radio, TV, computer, and phone, and have not complied with a doctor’s request that the 58-year-old senator have an air conditioner in her cell. Despite that, she has issued daily dispatches that she writes in longhand on her Senate stationery and which her staff distribute via social media. On February 10, she supported calls for a United Nations-led investigation into the drug war killings and the International Criminal Court’s “preliminary examination” of the situation in the country.

De Lima faces three counts of drug charges before separate courts in Muntinlupa City. Her arrest and detention followed a relentless government campaign of harassment and intimidation against her in response to her outspoken criticism of Duterte’s “war on drugs” and her demands for accountability for the deaths of more than 12,000 Filipinos killed by police and unidentified assailants. Duterte and his government have systematically disparaged, harassed, and intimidated those who have pursued accountability for drug war crimes domestically and internationally. The targets of the harassment campaign include United Nations officials, human rights organizations, and activists, lawyers, and journalists.

Since her detention, de Lima has contended that her status as an elected official should limit her prosecution to the jurisdiction of the official anti-graft court, or Sandiganbayan supervised by the Office of the Ombudsman. However, in October, the Supreme Court denied her motion and ruled that a trial court in Muntinlupa City should try her case, with prosecutors from the Department of Justice. As a result, de Lima is facing prosecution by judicial officers overseen by Justice Secretary Vitaliano Aguirre II, who had been leading the campaign to demonize de Lima in the media and in Congress. In September 2016, for example, Aguirre threatened to expose an alleged sex video of de Lima if she refused to admit her relationship with her driver Ronnie Dayan.

The Supreme Court ruling also disregarded de Lima’s contention that the information cited by the Department of Justice that was the basis for charges, was problematic because it was not clear on the exact charges, whether as a conspirator in the drug trade or as an actual trader of illegal drugs. In his dissenting opinion to the October ruling, Supreme Court Justice Antonio Carpio wrote: “To allow the continued detention of petitioner under this information is one of the grossest injustices ever perpetrated in recent memory in full view of the Filipino nation and the entire world.” Former Ateneo de Manila University law dean Antonio La Viña also assailed the ruling. “They are not free to pick whatever crime they think is charged in the information because there can only be one charge in one information,” he wrote in an opinion piece.

The Geneva-based Inter-Parliamentary Union (IPU) in April castigated the government’s legal justification for de Lima’s arrest, saying “there is serious reason to believe that she is targeted due to her outspoken criticism of the impact of the current government’s policies on human rights in the Philippines.” The IPU accused Duterte and Secretary of Justice Vitaliano Aguirre II of making statements about de Lima’s prosecution that “flout the principle of the presumption of innocence … and may put undue pressure on the course of [de Lima’s] criminal cases.” In November the nongovernmental international alliance of liberal and progressive democratic political parties, Liberal International, declared de Lima a “political prisoner” and demanded her immediate release.

The Philippine Supreme Court has not granted de Lima legislative furlough so she can perform her official duties. The Senate, which is dominated by Duterte allies, has ignored her requests to support a furlough. The Philippine National Police has also severely restricted public access to de Lima while she is in detention. The authorities only permit one-on-one visits from either family members or her office staff and those meetings are restricted to 30 minutes. On four occasions, police have prevented foreign supporters from visiting her. Police have also randomly inspected her belongings and confiscated, in one instance, photographs of her supporters bearing signs that read “Free Leila” or “No to EJKs” [Extra Judicial Killings], according to her staff.

“Every day that Duterte keeps de Lima in jail, he undermines Philippine democracy,” Kine said. “Senators and representatives, whatever their political views, should be calling for her release.”