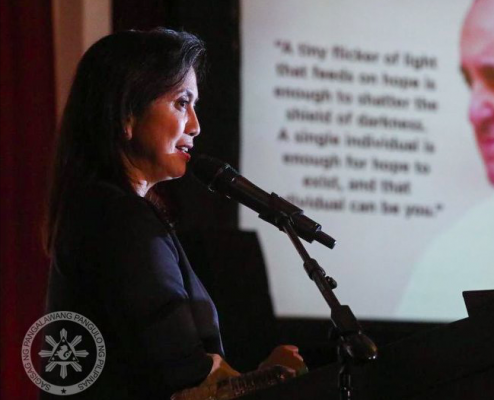 This opinion piece is part of the Silver Lining Series written by members of the Council of Asian Liberals and Democrats (CALD), an organization of liberal and democratic parties in Asia, to celebrate its 25th Anniversary this 2018.

There is no better time for women to be alive than today.

Doors are opening for us everywhere. In government and non-profit organizations, in media and publication, in the academe and in the world of business, women trailblazers are celebrated. In the Philippines, I am happy to say that Filipinas continue to enjoy more civil liberties as compared to most women around the world.

However, challenges persist. Even here in the Philippines, a country which prides itself in being a global leader in women empowerment, our ranking slid three notches down last year in the Global Gender Gap Report to 10th place from 7th in 2016. The reality remains that Filipinas have to work twice as hard to be where their male counterparts are in society. Only 50 percent of women in the Philippines have access to jobs, compared to more than 80 percent of our men in the workforce. Women are still part of our most vulnerable sector, accounting for 11.2 million of our poor. Women also continue to face detriment and discrimination.

Violence against women continues to be part of so many of our Filipinas’ lives. Even in social media, women and girls have become targets of sexual harassment and receive threats of physical and sexual harm. It has now become easier to instil fear and anger because aggressors hide behind anonymous or fake accounts.

Indeed, it is a disturbing global trend that women leaders in government are targeted deliberately. Here in the Philippines, well-oiled social media machinery spreads vicious lies about women who take political office, speak up against policies they do not agree with, and the constant erosion of our democratic institutions. To date, Senator Leila de Lima is a political prisoner after a long campaign that attacked not only her honour but her dignity. It seems that every week, Senator Risa Hontiveros, an active critic of the administration, is fighting against the spread of fake news about her online. After she launched an investigation into the president’s bank accounts, Ombudsman Conchita Carpio-Morales was threatened with the filing of an impeachment complaint. Currently, Chief Justice Maria Lourdes Sereno is fighting both an impeachment battle in Congress and a public perception battle online. I myself have been subject to threats of impeachment, spread of fake news, as well as of the outright abolition of the office I currently serve via charter change, not to mention the ongoing electoral protest questioning my place in office. These attacks are no different from the misogynist attacks women in politics have had to endure around the world.

Yet our women remain strong. And every woman has her own story to tell—a story of triumph and overcoming great odds.

In my life’s work, I have seen firsthand how our women have fought their way out of the shadows. I have not always been in politics; it was my late husband, Jesse, who was the politician in the family. While he was busy as the mayor of Naga City, I was working as a human rights lawyer, supporting him, and taking care of our home behind the scenes. It was the life I chose, and it was the life I loved.

My years as a lawyer were spent providing legal aid to indigent clients in far-flung areas—farmers, fisherfolk, indigenous peoples, labourers, and abused women and children. We would sleep in boats and makeshift huts because there was nowhere else to spend the night. We taught people paralegal skills, and explained their rights under the law so they could defend themselves even after we left. That was my work for more than a decade, and I may never have given it up if Jesse did not pass away so suddenly.

As a member of the alternative law group called SALIGAN, we had the chance to meet women who were victims of domestic abuse. We worked with them and saw first hand their very difficult struggles: how they lost their voices in their own homes and how they allowed frustration to foil their escape. Our group would listen to their stories and we would build a case together to make their aggressors accountable. But when it was time to hear the complaints in court, they refused to show up. They would return to their partners—to their abusive partners—worried that they did not have the financial means to sustain their children and live independently. Seeing the struggles of our sisters who fall prey to abusive relationships opened my eyes to the bigger picture: more than an issue of gender and equal opportunities for all, the root of the problem is economic. To address gender inequality and promote women empowerment, we must help them establish means to provide for and support themselves.

True independence comes from economic empowerment. When women are free from fear and self-doubt, they can become self-sufficient. In their success, they inspire other women to achieve their own independence. What we saw was revolutionary: women embraced hope in their new lives and stood up against their abusers. After my husband passed away and I stepped in to continue the work he left behind, I pursued my advocacy for women empowerment as representative of the 3rd District of Camarines Sur. We conceptualized programs and projects that created livelihood opportunities for women, linked them to markets, and connected them with mentors. When these women were given the chance to excel in their field, the possibilities were endless.

Empowering the Filipina has become one of the pillars of the Office of the Vice President’s anti-poverty framework called Angat Buhay (translated as Uplifting Lives). We believe that when a woman claims a seat at the table and a voice in society, she becomes an active force in moving our country forward. Our office has been partnering with various groups and individuals from government, the private sector, development groups, and civil society to address the needs of the Filipina and her family. We have also been engaging with different organizations and working with them to see how we could further develop programs and projects for the welfare of Filipinas.

Women may be facing tumultuous times, but this is also their time—our time—to shine. When women live in the light, they are able to stand up against the encroaching darkness that fosters division, anger, frustration, and hopelessness. Confidence and hope spark excellence, and excellence breeds success. Women are taking high-ranking positions in their respective professions, many even blazing their own trails. Now, women play prominent roles in every sector of society. Every day, more stereotypes are challenged and more glass ceilings are broken. As we celebrate Women’s Month, may we be reminded of our unique strengths and passion that found us where we presently are, and use them to illuminate the way for our fellow women.

Leni Robredo is the vice president of the Republic of the Philippines and chairperson of the Liberal Party, a founding CALD member-party.