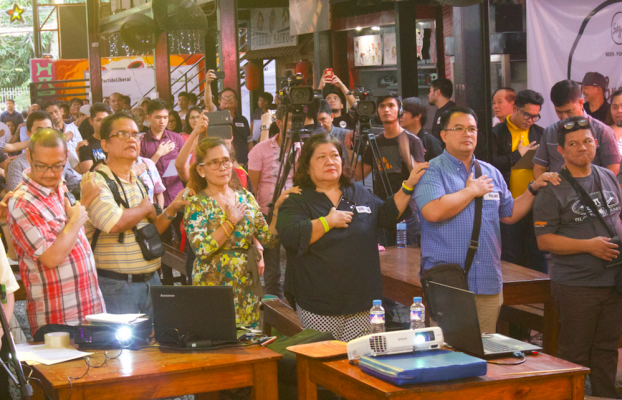 Dr. Vina Luna (not her real name), 51, is fed up with the administration’s abuse of power, especially the wave of killings after President Duterte took office.

“I don’t like what’s happening in our country. Every time I see the news on TV, I get mad,” she said during the oath-taking in Quezon City Friday.

Earlier, she recounted an incident last year while she was on board a bus and saw a victim shot dead on the street.

“Because we have to do something, otherwise, we will just wake up one day, and we’re under, you know, he who is not to be named. I call him Voldemort. Remember, we have to use our good magic. It’s about time we gather Dumbledore’s army,” she said, referring to the protagonists in the Harry Potter series of books and movies.

Nick Flores (not his real name), a senior citizen-farmer, said the last time he became part of an organization was in the 1970s when he joined the leftist Kabataang Makabayan (Patriotic Youth).

He said he feels that the times call for more active citizenship and that in joining Partido Liberal, he is accepting the challenge of fighting for what is right and against what is wrong.

Luna and Flores are among the almost 600 non-politicians who recently joined the party.

After many of its politician-members left the party, its president Sen. Francis Pangilinan last year opened the party to non-politicians.

He compared these times to the early 1970s, soon before and soon after the late dictator President Ferdinand Marcos declared martial law.

That time, before martial law was declared, prices of basic goods were rising, moves to change the Constitution were afoot, and the media, the political opposition, and other democratic institutions were under attack, said the former Quezon province representative.

Senator Franklin Drilon, who was also at the Quezon City oath-taking, told the new Liberals about the need to fight against moves by the House of Representatives to change the Constitution through a constituent assembly or con-ass.