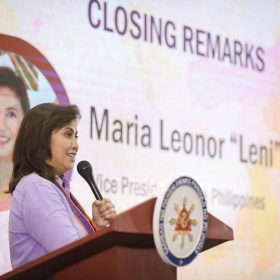 Liberal Party (LP) senators on Wednesday welcomed the decision of the Supreme Court, sitting as Presidential Electoral Tribunal, to uphold the integrity of the Automated Election System (AES) that was used in the 2016 national and local elections.

“We are satisfied with the PET’s decision upholding the results of the 2016 elections. We are happy that democracy is alive and at work in our country,” said Sen. Franklin Drilon, also the Minority Floor Leader.

In a 34-page resolution, the PET junked the Ferdinand Marcos Jr.’s question on the integrity of the AES that was used in the recent polls where he was defeated by Vice President Leni Robredo by more than 200,000 votes.

“The decision validates VP Leni as the legitimate vice president. This decision removes all doubts cast by her critics regarding her victory,” said LP president, Francis Pangilinan.