Liberal Party (LP) senators said the planned cancellation of barangay and Sangguniang Kabataan elections and allowing President Duterte to appoint barangay officers in charge could be a step away to a nationwide martial law. 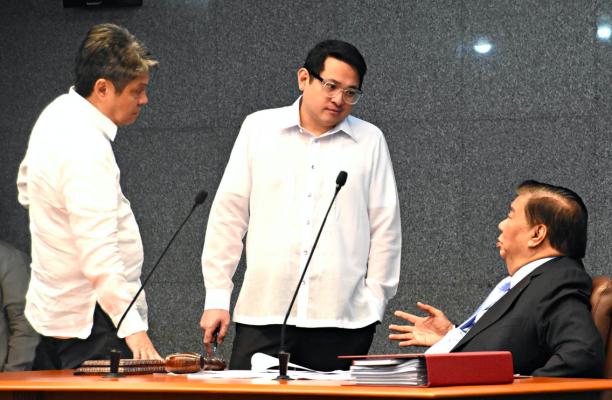 “We are against the postponement of the barangay and SK elections and even more, we are opposed to the proposal to appoint barangay officials,” said Senate Minority Leader Franklin M. Drilon.

“Postponing the barangay and SK elections for the nth time will deprive the public their constitutional right to choose their leaders in the barangay level,” added Drilon.

Earlier, Duterte expressed his intention to appoint officers in charge in lieu of a holdover status because of alleged involvement of some barangay officials in illegal drugs.

The Senate Committee on Electoral Reforms recently approved a measure that will postpone barangay and SK elections and allow President Duterte to appoint officers-in-charge for the barangay on interim basis.

In case the barangay and SK elections are postponed anew, Pangilinan said the hold-over status of current officials must be respected because they were selected by the people.

In her letter to the Senate Committee on Electoral Reforms, Sen. Leila De Lima said she agrees with the position of the Institute for Political and Electoral Reform (IPER) and National Citizens’ Movement for Free Elections (Namfrel) that “a free election affords us the possibility of replacing barangay officials, perceived to be narcopoliticians, through democratic means.”

The most prominent political prisoner in the country said she is against postponing the barangay elections to October 2018, instead of the first postponement to May 2018, because October 2018 is also day of the filing of certificates of candidacy for the May 2019 senatorial and local elections.

De Lima also enumerated five reasons for her opposing the provision granting the President the power to dismiss and appoint replacements for barangay officials in the so-called drug list.

They are: 1. A mechanism to charge barangay officials involved in the illegal drug trade already exists. 2. Granting disciplinary power to the President in this bill is a legislative rider not allowed by the Constitution. 3. The cause for removal in the bill violates the right to due process of elected public officials. 4. Unregulated power to remove barangay officials and appoint officers-in-charge will result in an administrative nightmare at best and corruption at worst. 5. Many barangay officials do not have the means to challenge orders of removal from the Office of the President.

For Sen. Bam Aquino, the SK polls must push through this October, saying the implementation of Republic Act 10742 or the SK Reform Act is long overdue.

“We stand firmly against appointing barangay officials and concentrating power in Malacanang. If there is fear of barangay officials involved in the drug trade, step up investigations, expose these criminals, and bring them to justice,” said Sen. Aquino.

“We must not surrender our right to elect our leaders and destroy the building blocks of our democracy,” added Aquino, co-author and co-sponsor of the SK Reform Act.

As a former student leader and former chairman of the National Youth Commission, Sen. Aquino has long advocated for the welfare of the Filipino youth through several legislations, including the SK Reform Act (RA 10742), which he pushed as co-author and co-sponsor during his time as chairman of the Committee on Youth in the 16th Congress.