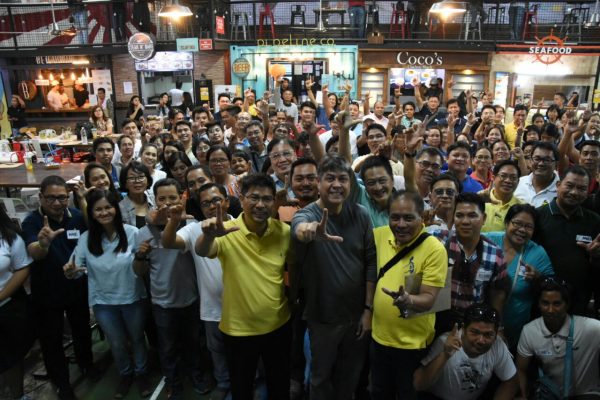 During the “world café” type discussion before the formal oath-taking at the Moderno Food Park, 170 soon-to-be members from the provinces of Tarlac, Bataan, Bulacan, Zambales, Nueva Ecija, and Pampanga were asked why they consider themselves liberal and why they are joining the party at the invitation of party leaders led by its president Senator Francis Pangilinan.

“Liberal ako dahil ako ay naninindigan sa katotohanan, katarungan at higit sa lahat, may takot sa Diyos. Yan po ay mga katangian na wala ang kasalukuyang administrasyon (I am liberal because I believe in truth and justice, and most of all, have fear of God. These traits are absent in the present administration).”

For his part, Pangilinan, in his message to the new members, exhorted the new members to invite more to join the party so that it is infused with new blood.

ON NEW TAXES AND CHARTER CHANGE

Former Quezon province congressman, Erin Tanada, who is also the party’s vice president for external affairs, told the new members that the party needs to confront the administration’s new taxes and efforts to change the Constitution.

“Tren talaga siya, at sinasagasaan na niya tayo. Oo, mataas nga ang take-home pay ng ilang mga manggagawa natin, pero binabawi din naman yun sa pagtaas ng mga bilihin (It’s like a train that’s running all over us. While the take-home pay of some of our workers may be higher, it is not enough to cover the higher cost of basic goods),” he said, referring to the government’s Tax Reform for Acceleration and Inclusion (TRAIN).

After enumerating the goods and services that have increased in cost (rice, fuel, electricity, tax stamps for birth and death certificates, PhilHealth and soon SSS monthly premiums), Tanada also criticized the administration-dominated House of Representatives for pushing for Charter change.

RISING TO THE CHALLENGE

According to the records of the party’s National Organizing and Membership Committee, this latest batch of new Partido Liberal members were from the sectors of transport, women, youth, OFWs (overseas Filipino workers), professionals, farmers and fishers, business, and indigenous people.

Of the 170 that took their oath, 25 applied online through the party’s online recruitment platform partidoliberal.ph, which was launched January 19 at the party’s 72nd anniversary celebrated through oath-taking rites in Cebu, Naga, and Quezon City.